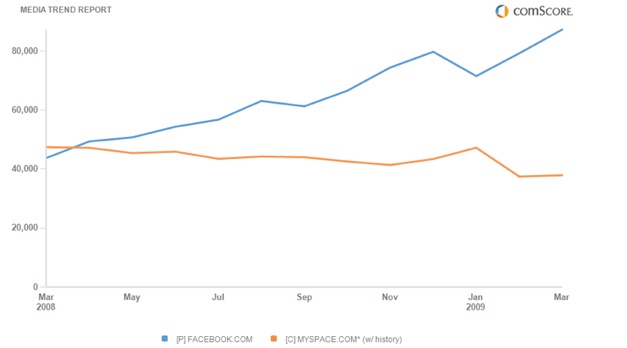 Michael Arrington of Tech Crunch fame noted on his blog a couple of days ago the fact that My Space’s growth is stagnating compared to its arch rival Facebook .

Getting too it – why is My Space in decline?

Simply put – Usability. It sucks. I never got onto My Space because almost every time I visited it, I encountered the following problems

I’ve always been of the opinion that My Space’s popularity stemmed from 2 key areas – Celebrity and Personalisation. The Celebrity aspect is that Hollywood A-List types, Rock Bands, Rap Singers, Soccer, Aussie Rules all got onboard, as the benefits from a distribution point of view and the relative low cost for the publicity and doing the “in thing” were all tangible and measurable in their benefits. Everyone flocked online, as the iconisation and ability to “friend” aspect were easy, accessible and straight forward. The Personalisation side is the ability to build your own page “just so”. That’s where the “Usability that sucks” enter.

Facebook on the other hand is positively anodyne in its austere interface. I’ve been on it for about 2.5 years now and watched it go through 3 changes. The current interface leaves alot to be desired, so much so, that I barely login anymore unless I’m wanting to see what is going on with friends who are travelling overseas. On the upside, the community is cohesive and a proper closed garden if you set your privacy settings correctly. The other strengths, or they were in the past, was that the interface was relatively persistent and most importantly, it was readable, putting the content as the focus. Usability and the subsequent User Experience went up, because, well it was easy to use.

And then when Facebook released the developer API in early May 2007, all hell broke loose, as Facebook’s own way of personalisation had entered the market, driven by the hot trends of the day – beyond the walls of the Facebook employee group, who whilst smart, could never hope to compete with the groundswell of applications from the global developer community racing to commercialise the next hot idea. Smart move Team Facebook.

And look who else has done good by releasing the API – Apple. iPhone. App Store. Is Good. RIM (Blackberry), Nokia & Sony Ericsson are playing catch up.

My Space has a MASSIVE user base. Right now. They need to start utilising it to maximise revenue by creating a community within its boundaries, one that embraces the individuality. They just need to fix up the Usability for it to work.

This site uses Akismet to reduce spam. Learn how your comment data is processed.